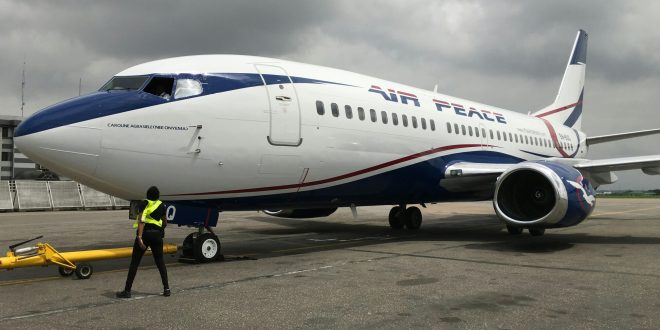 A thirteen year old first time flyer accompanied by his parents suffered from flight nausea and vomited in an Air Peace aircraft while it was airborne which made the captain in Command inform air traffic control and Port Health before the flight landed at the Mallam Aminu Kano International Airport, Kano.

Air Peace in a statement said they did not airlift any passenger suspected of being infected with Coronavirus on its Lagos-Kano flight today Tuesday.

The airline explained that a 13 year-old boy who was accompanied by his parents but flying for the first time suffered from flight phobia and vomited in the aircraft while the aircraft was airborne.

According to the airline, unfortunately, some officials at the airport made a video of the aircraft when it arrived and shared it on the social media and misinformed the public that the aircraft had a COVID-19 suspect.

Air Peace disclosed that the flight waited for about 50 minutes so that officials from Port Health Authority would attend to the boy.

The Chief Operating Officer of Air Peace, Mrs. Toyin Olajide who made this known said that as it has become a tradition, the airline’s COVID-19 team sanitize and check the temperature of every passenger and gives approval before he is allowed to board the airline’s flight.

She also disclosed that the aircraft was again disinfected by Port Health Authorities at the Kano airport before passengers were checked in to Abuja.

“We did not carry any passenger that has COVID-19. What happened was that a 13 year-old boy was travelling by air for the first time. He was with his parents. While airborne he started vomiting. The pilot promptly called Port Health, even when it was obvious that he was suffering from flight phobia.

“The Captain also informed the Control Tower about the incident but when the aircraft some people made a video of the aircraft and started circulating false information about what really happened.

“When the aircraft landed it was delayed for 50 minutes so that Port Health officials would come and examine the boy. They checked his temperature and certified him okay. They also disinfected the aircraft and we boarded passengers to Abuja.

“We have been protecting out passengers and crew from Coronavirus. We are the first airline to adopt the screening of passengers for COVID-19 before boarding them and we have our COVID-19 team, which must certify every passenger before he is allowed to board. It is regrettable that some people chose to misinform the public about what happened,” Mrs. Olajide said.

Nigerianflightdeck is an online news and magazine platform reporting business stories with a bias for aviation and travel. It is borne out of the intention to inform, educate as well as alter perceptions with balanced reportage.
Previous Aero responds to issues generated on flight carrying former VP’s son, Bauchi Governor
Next Unions call for safer work environment, drastic curbing measures as COVID-19 hits harder